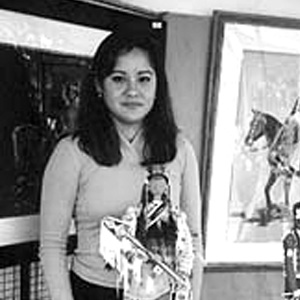 Jamie Okuma, Nomad Two Worlds’ first female collaborator, is of Luiseno and Shoshone-Bannock on her mother’s side, her father is Okinawan from Hawaii. She was born in Glendale California and spent her first five years in the city before moving to the La Jolla Indian Reservation in San Diego County. Jamie attended the Institute of American Indian Arts (IAIA) in Santa Fe, New Mexico, in the fall of 2000. That same year she was awarded a fellowship from the Southwestern Association for American Indian Arts (SWAIA) and at the age of 22, was the youngest artist in the history of Santa Fe Indian Market to win Best of Show, the first of her four Best in Show awards: two from SWAIA and two from the Heard Museum Indian Fair and Market. Jamie has been featured in numerous publications, museum exhibitions, won many awards, consulted with the Smithsonian Institute’s National Museum of the American Indian’s exhibition Identity by Design, and currently featured in the exhibition Grand Procession at the Denver Art Museum. Jamie is best known for the intricacy and extreme authenticity of her beadwork, and is also a much-lauded painter. 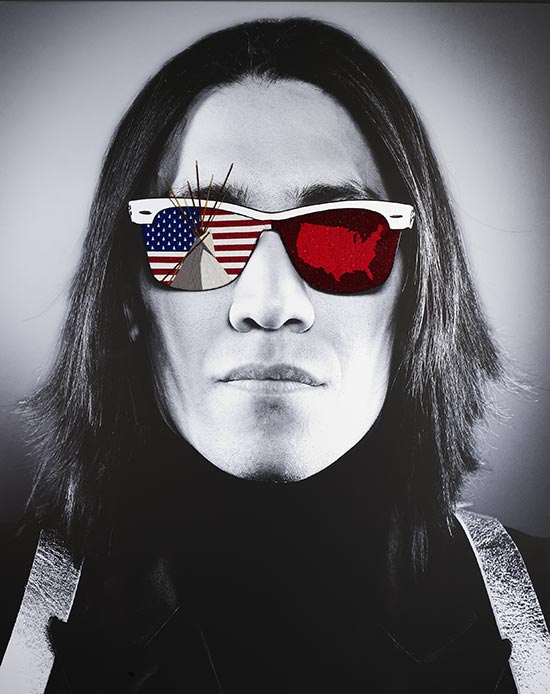 Okuma: The subject in the portrait portrays a 21st century Native American. In the sunglasses the United States of America is seen through “Red Eyes”. The red lens illustrates a country, a people, and a belief. Native Americans will always see this country as Indian country, a “red country”. It is a visual reminder to all people that Indians inhabited this country from coast to coast. The flag represents my love and respect of this country. Numerous relatives fought and lived under this banner. It is a symbol of our survival and adaptation.